As men age and their hormones change, they may see an increase in abdominal fat. Or they notice a lack of definition and sagging skin. In some cases, patients can harvest those fat cells and use them as a natural form of filler. This is what’s known as BodyBanking®. It is a highly individualized procedure that allows men to control where exactly they want to sculpt and add volume to their physique. When liposuction and BodyBanking® are used together, they can enhance isolated areas of the body while removing excess fat from others. Male Plastic Surgery is the only aesthetic practice in Chicago to offer BodyBanking® for men. 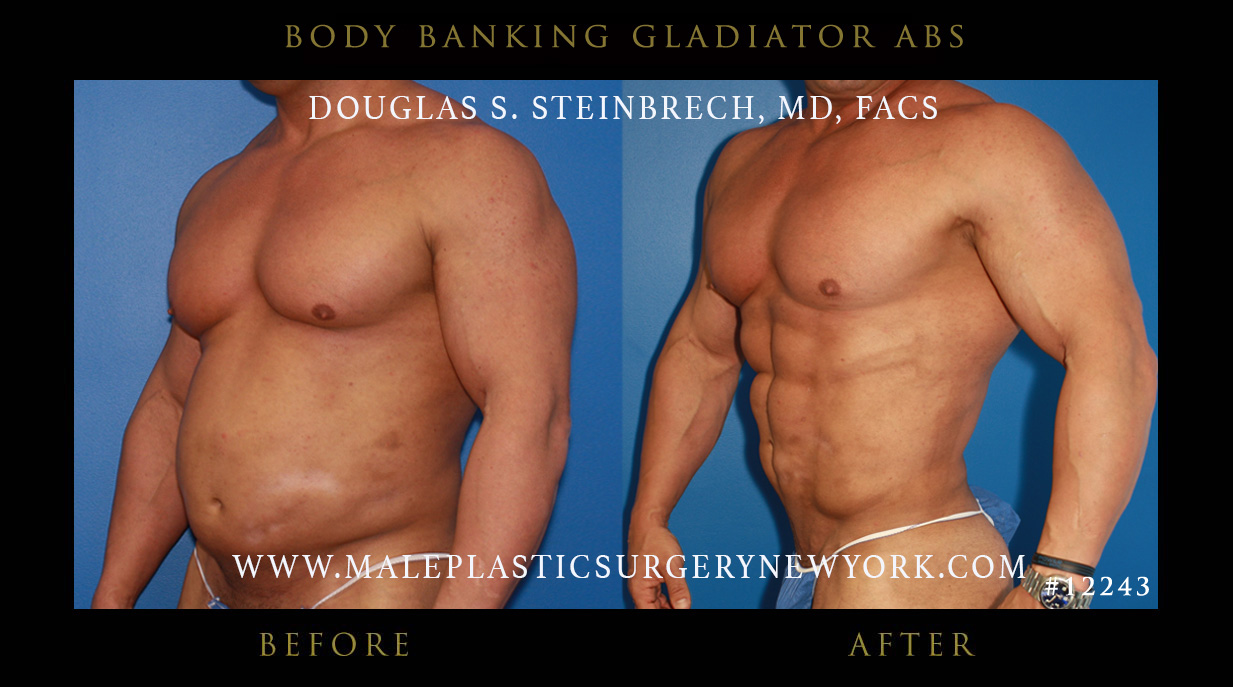 BodyBanking® is a plastic surgery procedure developed by Dr. Douglas Steinbrech which allows the transfer of fat from one part of the body to the other. It can be used to sculpt, mold, and reshape the pectorals, glutes, biceps, triceps, shoulders, and calves. During surgery, those bad fat cells that men accumulate around the flanks, lower chest, and abs are extracted and used to strategically add bulk to areas of the body.

This is commonly performed alongside liposuction. During liposuction, pockets of stubborn, unwanted fat are removed and typically discarded. However, using the BodyBanking® technique, those cells are able to be isolated and injected back into areas of the body that need more structure or volume.

When the patient has excess calories and carbs after surgery, instead of diverting back to the love handles or lower belly, for example, they are transplanted to the newly transferred-fat areas. After BodyBanking® has been completed, anywhere that has been injected with this new fat will now take on those carbs and calories. Not only does this make men less likely to develop visceral fat, but they will likely see their muscles get bigger with time.

BodyBanking® introduces fat to parts of the body where there has been disproportionate growth. The harvesting of those fat cells can be performed in one of two ways. The first is during liposuction when fatty deposits are removed from the body. The surgeon will then have the excess fat cleaned and purified so it can be used to inject into the body. This option is preferred since it’s considered safer and more cost-effective for the patient. Compared to traditional liposuction, the BodyBanking® procedure only takes 1 to 2 hours.
If the patient isn’t undergoing liposuction and wants BodyBanking® to be performed separately, the procedure starts with the administering of a local anesthetic into the donor and treatment areas. Next, fluids are injected into the donor site for fat collection. The cells are then placed into a syringe to be processed and cleaned. After, the fat is injected into the patient’s desired areas.
It’s important to remember that the amount of fat injected back into the body must be greater than what’s actually needed. This is because fat is naturally absorbed into the body. The excess cells will provide the correct amount of volume that’s needed to reach the final result.

Who Is a Good Candidate for BodyBanking®

Male individuals who are undergoing liposuction and want to fill or contour specific areas of the body are likely to be interested in BodyBanking®. This type of fat transfer is also an alternative for patients who are allergic to traditional bovine collagen. To be a good candidate, prospective patients should meet a certain criteria. First, they should be in good overall health before undergoing the procedure and have ample fat present. Also, it’s important to have realistic expectations regarding the surgery outcome. During a consultation, the surgeons at Male Plastic Surgery Chicago will ultimately determine which men make good candidates for BodyBanking®.

There is little to no downtime associated with the BodyBanking® procedure. Immediately following surgery, swelling, bruising and minor discomfort may occur. However, these side effects typically dissipate after two days. Since BodyBanking® is minimally invasive, patients should be able to go about their daily routines without disruption. It should be noted that the results of BodyBanking® will vary for each individual. In most cases, the injections can last anywhere from a few months to permanently. Your surgeon will discuss a maintenance plan, if necessary, during your consultation.