As men age, the natural contour and structure of the face tends to degrade. The appearance of deep lines, excess skin and sagging brows can have a serious effect on self-confidence. These problems, however, can be readily addressed through one of the most common cosmetic procedures: the facelift. Facelifts are a safe and effective way for men in the Chicago area to rejuvenate their appearance. Also known as a rhytidectomy, a facelift tightens patients’ underlying facial muscles and removes excess skin, resulting in a smoother and more youthful look. As a board-certified plastic surgeon with years of experience, Dr. Steinbrech provides men across Chicago with individualized facelift procedures. 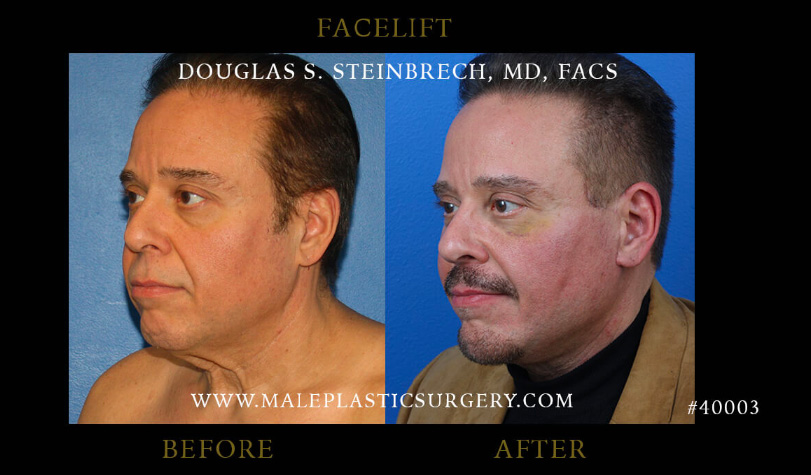 WHAT IS A FACELIFT?

A facelift aims to improve obvious signs of aging visible in the face. Sagging skin, deepening fold lines, and excess fatty tissue are some of the clearest signs of aging that men undergo. These signs can be caused by a variety of factors, including (but not limited to) smoking, stress, sun damage and genetics. Fortunately, all of these signs of aging in the face are easily rectificable via a facelift procedure. A facelift is a straightforward operation involving small incisions around different areas of the face. Muscles are tightened and repositioned before these incisions are closed. The resulting appearance enhances the natural structure of the face, eliminating years of aging. While facelifts have been popular with women for years, they are growing in popularity among men wishing to regain a youthful appearance.

Oftentimes, a facelift is complemented by other cosmetic procedures. These may include a neck lift, eyelid surgery, or facial injections such as botox. Dr. Steinbrech works individually with all patients out of his Chicago office to determine the best possible course of treatment.

HOW IS A FACELIFT PERFORMED ON MEN?

When performed by a board-certified plastic surgeon, a facelift is a low-risk procedure with high efficacy. During an initial consultation in Chicago, Dr. Steinbrech works with patients to ensure that each operation is tailored to meet your specific needs.

Patients can opt for IV sedation or general anesthesia. Once medication is administered, the operation is carried out with incision techniques. The exact procedure depends on the desired degree of change, which will be predetermined during your consultations with Dr. Steinbrech. During a traditional facelift, an incision is made near the temples, running down to the lower scalp by the patient’s hairline. Then, fatty tissue is sculpted or redistributed, while muscles are lifted and repositioned. In some cases, a second incision is made under the chin. Facial skin is then redraped and trimmed before the incisions are closed with sutures or adhesives. “Limited-incision” facelifts focus on the eyes and mouth, with incisions generally running from the temple to the ear. These operations are generally performed on patients with less signs of aging, and therefore provide less intense results.

Often, a facelift is performed in conjunction with a neck lift. These operations focus on loose skin and fat under the chin, and are performed in a similar way to a standard facelift.

WHAT MAKES A GOOD CANDIDATE FOR A FACELIFT?

Our facelift procedures are intended for men in Chicago who wish to improve signs of aging in the face. Candidates are generally aiming for a younger appearance and a renewed sense of confidence. Patients should be otherwise healthy individuals, without certain medical conditions which may complicate the healing process. Candidates should be nonsmokers, as smoking may also complicate the healing process. Just as important is that patients have a positive outlook and realistic expectations about results.

RECOVERY AFTER A FACELIFT

Upon the completion of a facelift, a bandage is generally applied to minimize swelling. Drainage tubes may also be applied to drain any excess fluids from the wound. Dr. Steinbrech provides all patients with specific instructions to care for the treatment area, as well as prescribing any necessary medications. Be sure to take any medications exactly as instructed, as doing otherwise will inhibit the healing process. Patients may experience swelling or muscle tension in the days and weeks following surgery. Generally, these are completely resolved within months, and most patients are able to return to work within three weeks.